So I set up a thing to delete my old tweets. Just wipe everything up to about a month ago. And to regularly check in and delete as required.

Something has gone wrong and a bunch of tweets from 2019 have bobbed up. 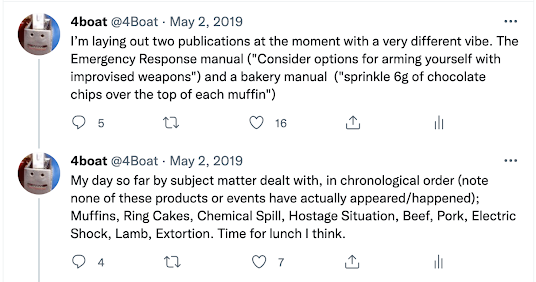 Posted by Chris Rees at 5:34 PM No comments:

My psychologist’s practice is in a light industrial area. Earlier, I was in the waiting room and scribbling in my diary as the usual soothing ambient vibes wafted from the stereo. I was only there five minutes or so. Every 30 seconds a reversing forklift next door would enter the audio mix.

Posted by Chris Rees at 2:15 PM No comments:

After a sweaty run and no breakfast this morning, I am now the lightest I have been since about 2010-ish. 97.4kg is still overweight but I am hopeful I can get lighter and also get my cholesterol down by my next check in January. I don't have a target weight but under 95 would be amazing. I am too slack to measure my waistline but I must, as that's more important for blokes than your weight by fair.

Michael has finished his Grade 12 exams* and had his school formal last week. His last event like this was the Grade 10 leavers dinner, which wasn’t a huge success. But he’s a more outgoing and confident person now, and he was looking forward to this one with just a touch of nerves.

I took him to Les Lees to hire a suit. They are always really lovely in there, and they made everything very easy. Michael went straight for a tux without seriously considering any other options. 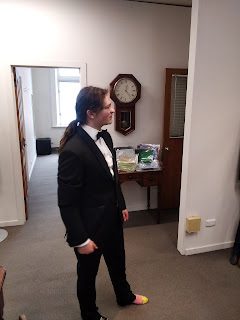 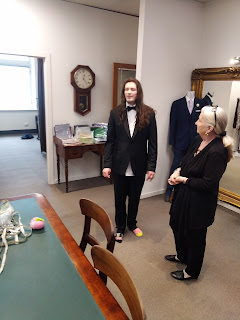 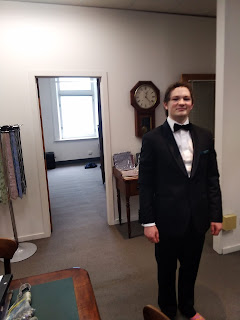 We both really enjoyed the experience, which was quick and painless. Elf was in charge of the next step: Michael was keen to get some colour in his hair for the big night. Just a few centimetres of the ends of his long hair. He ended up with a bit more than that! 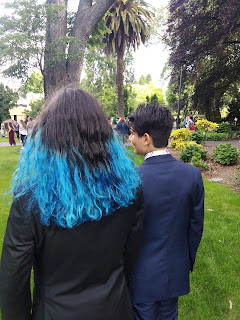 Everyone met in St David’s Park before the dinner for posing and promenading. Dinner was on the Elizabeth St Pier, and Michael said it went really well, he had fun, and repaired to his mates’ house after for pizza and movies. We were just so happy for him, having a fun night, looking great and feeling good. 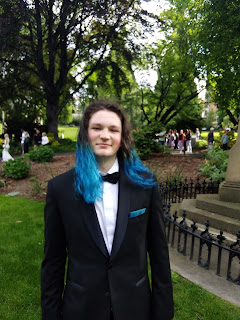 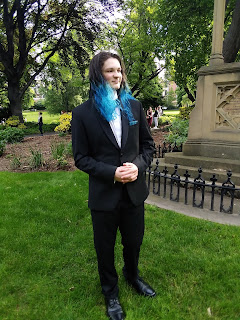 A few days later we went to the University of Tasmania open day, and Michael sorted out his enrolment in a Bachelor of Arts. His results will come out on December 15. He feels quietly confident, and we are all quite buoyed by the ATAR expert Marcus telling us Michael has nothing to worry about.
*Michael has an extra 'exam' on Sunday, but it's more of an aptitude test to gain a certificate of proficiency in Chinese.
Posted by Chris Rees at 9:27 AM No comments:

Mum on the drums

On Saturday Michael and Elf and I went along to see Mum's ukelele band play. We sat with Sally and Marcus's girlfriend Miranda … we’re keen to keep her close to the family while he's away for three months.

The band is called the Fuschia House players. I didn’t know why but the leader explained it started with a small group who would meet at the Fuschia House in the Botanical Gardens to play. There were about 25 regular ukeleles with a ukelele banjo in there somewhere; accompanied by a pianist, a bass ukelele and our dear mum on the drums. Mum also played ukelele and sang a solo!

The program hummed along. It included Down Along The Dixie Line by Gillian Welch, a beautifully sad song which they sped up and made quite jolly. Mum introduced herself singing and playing Whispering Grass. I think this might be mum's first time ever singing solo for a crowd. She was a little wavery while speaking, but from her first note she sang loud and clear as a bell. Sally and I were so proud. 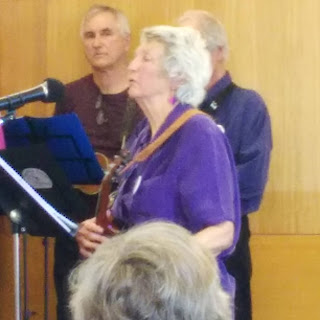 On the drums she was in her element! Mum has always had great rhythm – she bought herself some bongos way back in the sixties during the international bongo craze, which are still in the family. During her years as a potter she also made her own ceramic drums. She is always drumming around the house, as long as I can remember. In the last year she bought herself a 2nd hand snare drum and some other gear. On Saturday she presented a very Charlie Watts figure as she held down the beat with the brushes, beaming, low key but faultless.

These are stills from Sally’s short video of the encore, Blue Suede Shoes. We love ya mum! 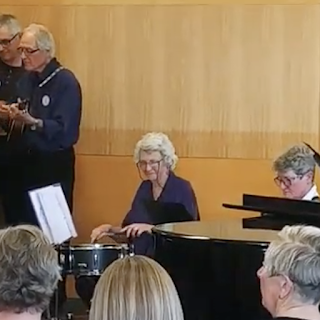 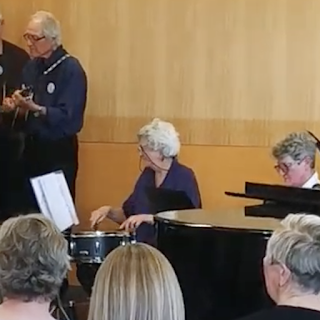 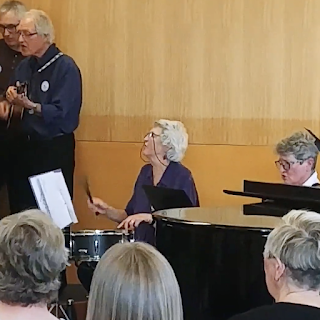 Posted by Chris Rees at 9:02 AM No comments:

An afternoon in the study with dad

I tried to help Dad recover some passwords this afternoon. We didn't make much progress but it was nice to spend some time in his study/computer cave with him.
At one point he was poking at his phone and it was making announcements.
Phone - MEMORY FULL.
I asked - What is your memory full with Dad?
Dad - Advertisements for memory cleaners. 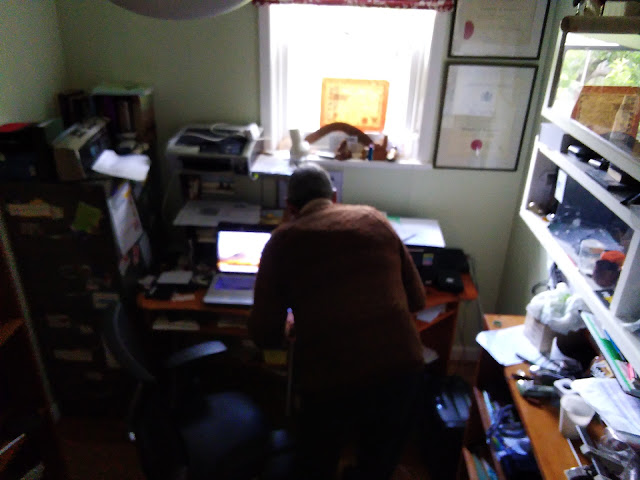 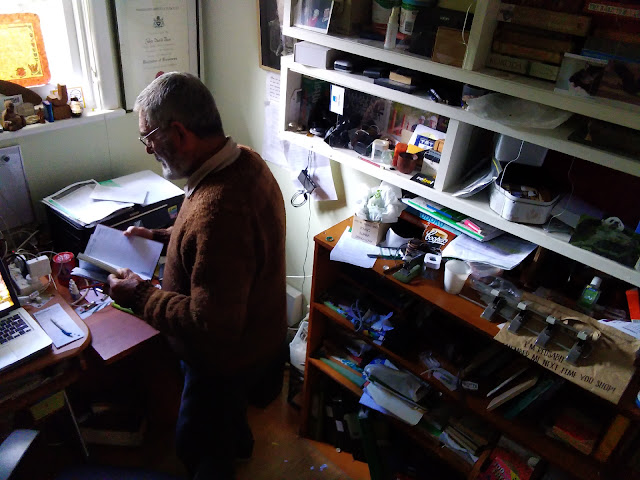 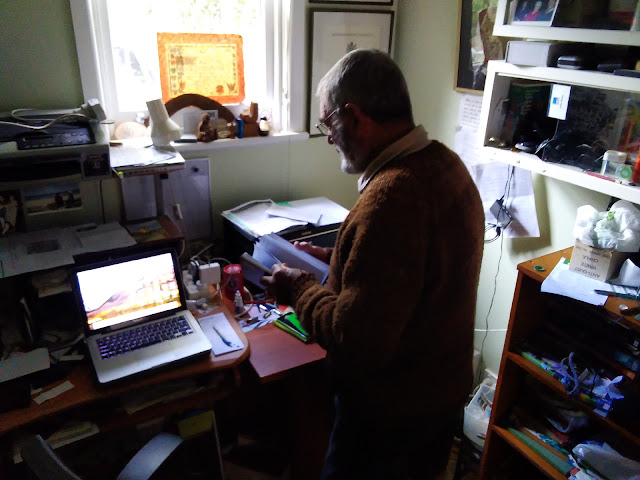 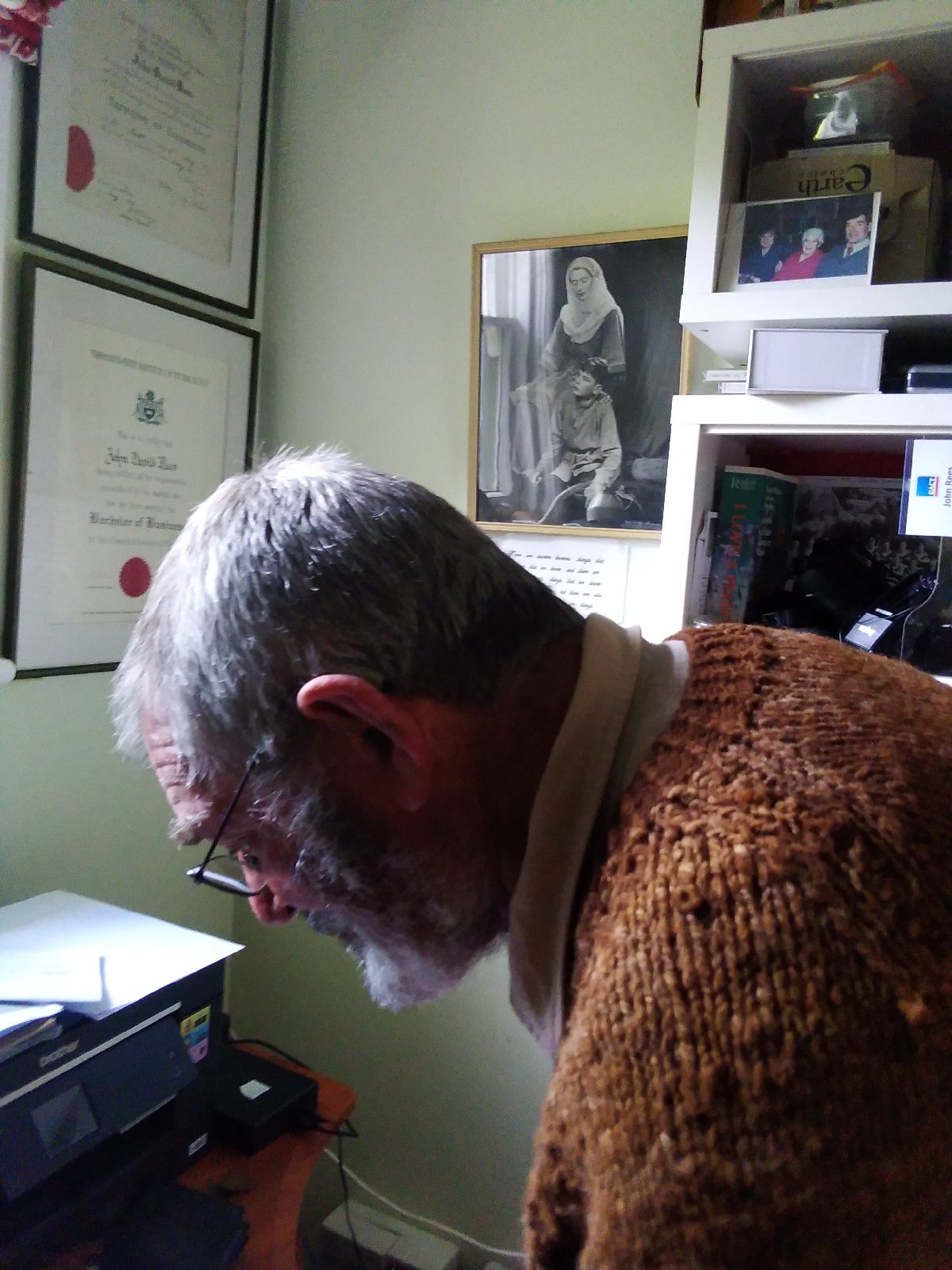 In this photo behind Dad he is playing the son of Macduff in Macbeth, aged 12. He looks a lot like Marcus, although Marcus says he looks like Michael. I think this character has one line. Assassins arrive to kill Macduff who has fled. They call Macduff a traitor.
Macduff junior says “Thou liest, thou shag-eared villain!”
The assassin says: “What, you egg!” before stabbing the unfortunate youth. Dad vaguely remembers being asked to yell "O mother!" 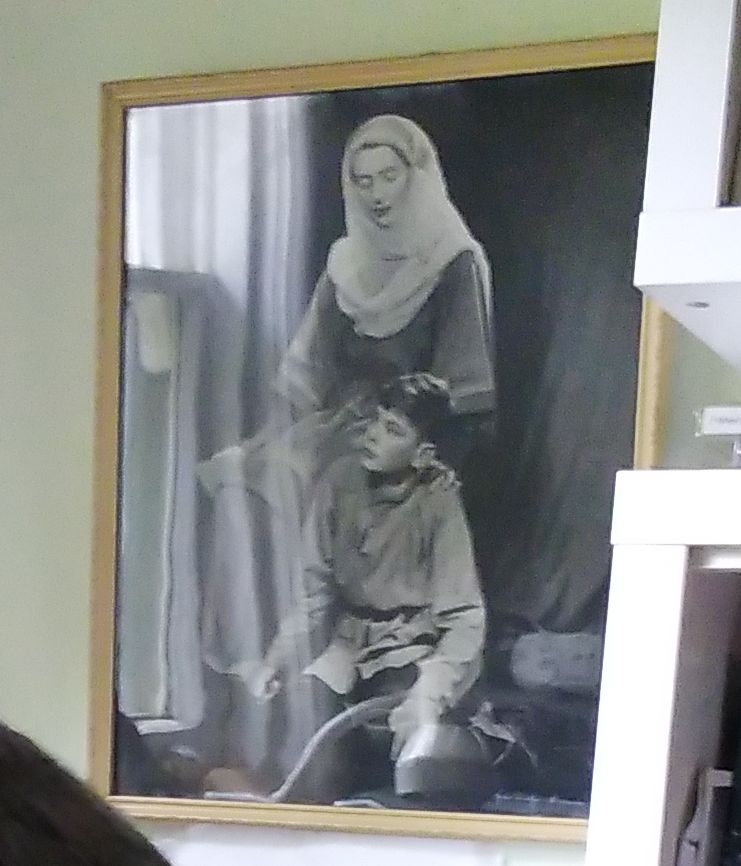 Posted by Chris Rees at 9:42 PM No comments: 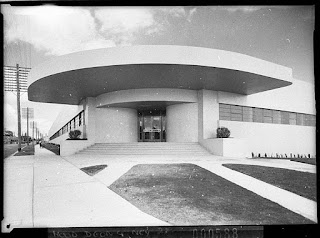 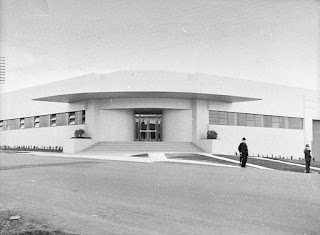 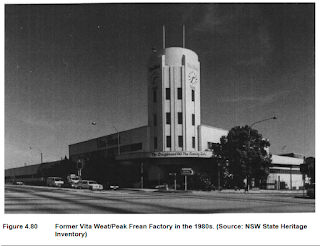 Now it's a Bunnings. 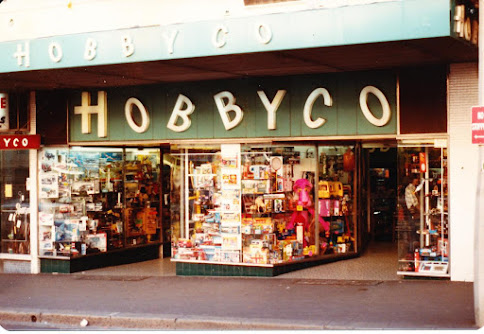 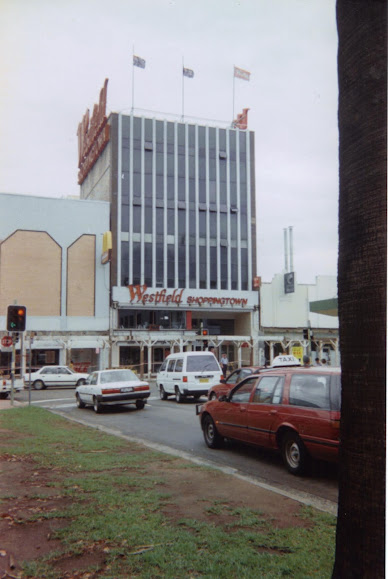 “Westfield Burwood was built on a slope which meant that it was the first centre that facilitated an incline mall design. This meant that the centre was a gently-ascending grade and that the levels were connected via a system of ramps, stairs and escalators. The centre also featured a circular stage and an ornate air fountain which shoots controlled compressed air with metallic coloured balls in the air.” - Wikipedia

Posted by Chris Rees at 9:09 PM No comments:

Walking the dog in the rain

This is my usual route: out our back gate, around the hill and up the steps to the soccer ground, around the ground on the gravel road, then through the wire fence near the cricket nets and back down again. It's a wobbly figure 6. 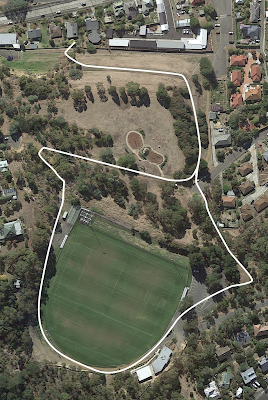 Winston stops frequently, so I thought today I would try to actually to use my waiting to time to take photos and post this ON THE GO. It didn't work, it was just too wet for my touch screen to grasp what I wanted it to do. So I'm posting this from home as per usual. 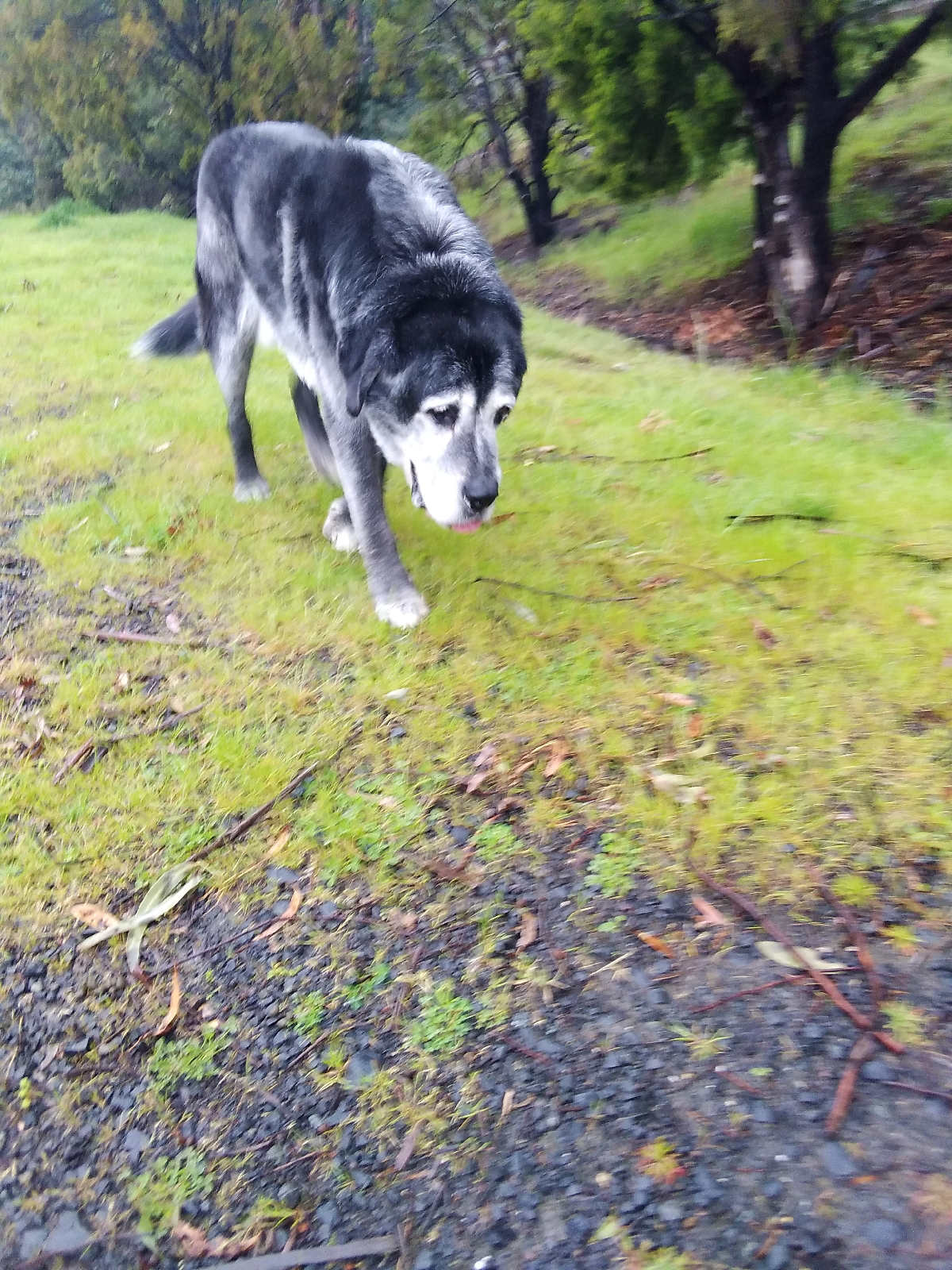 Our old boy, on the gravel road around the soccer ground. 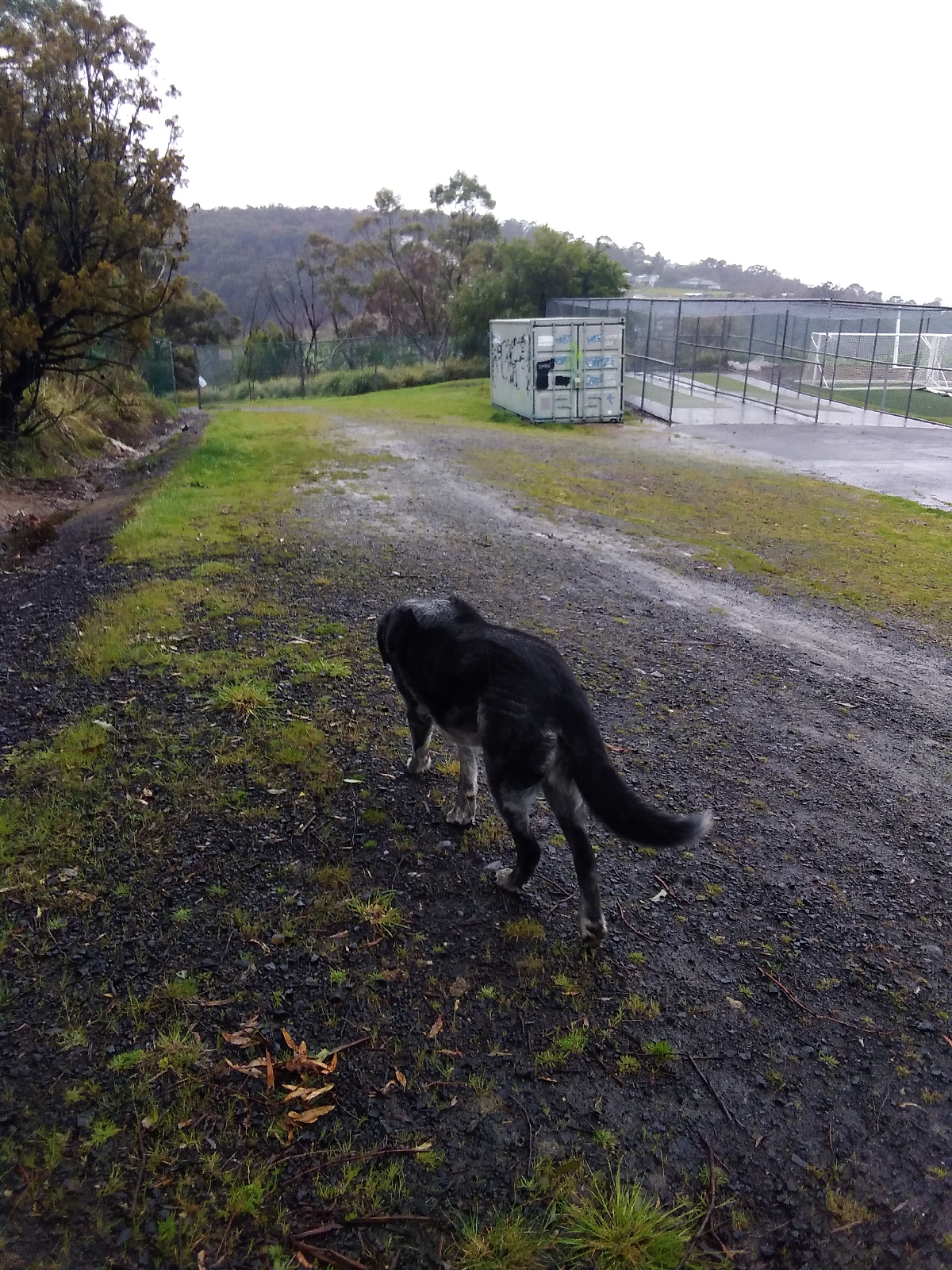 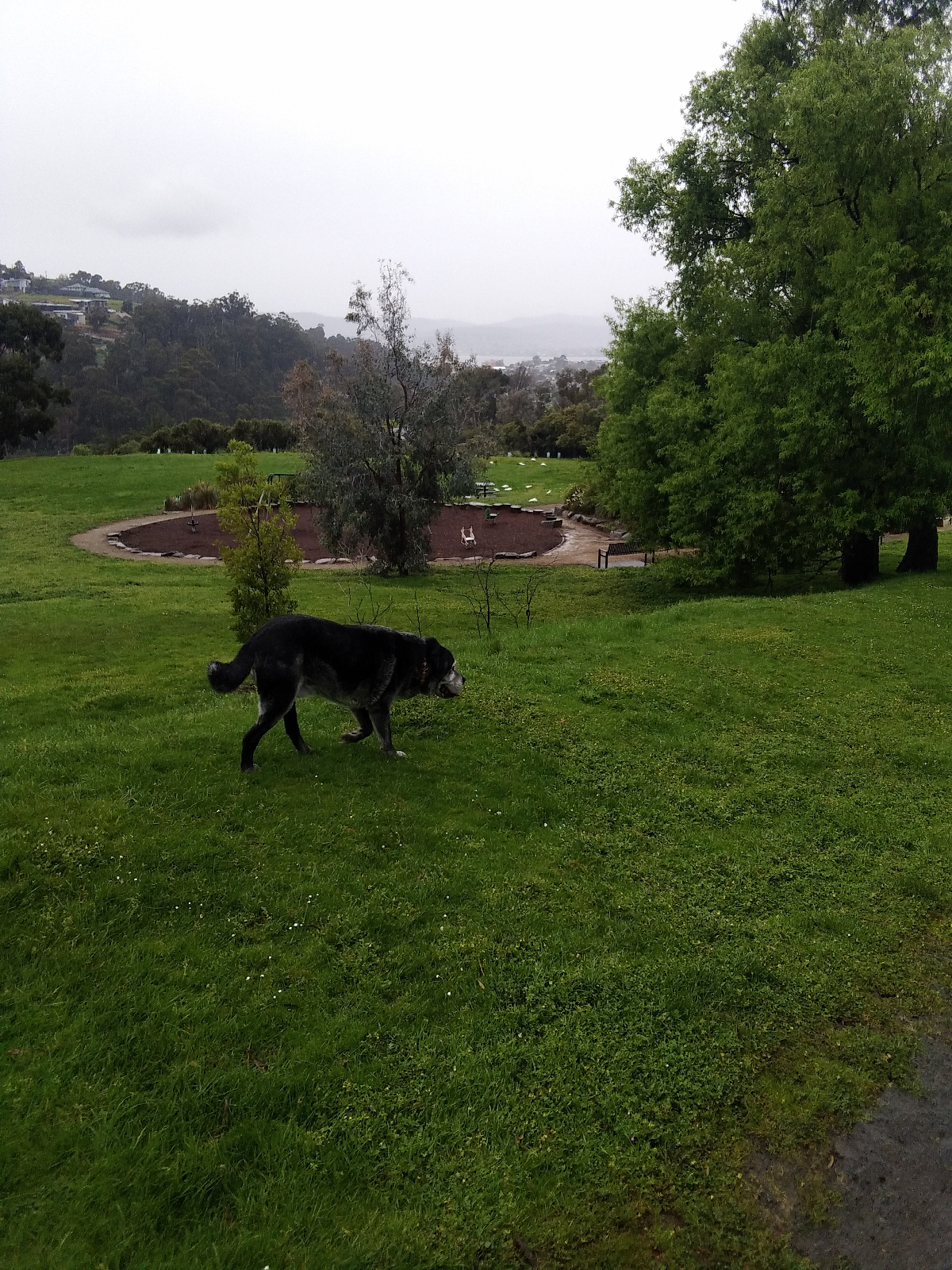 Below the soccer ground is this playground that was redeveloped really well about 3 years ago. 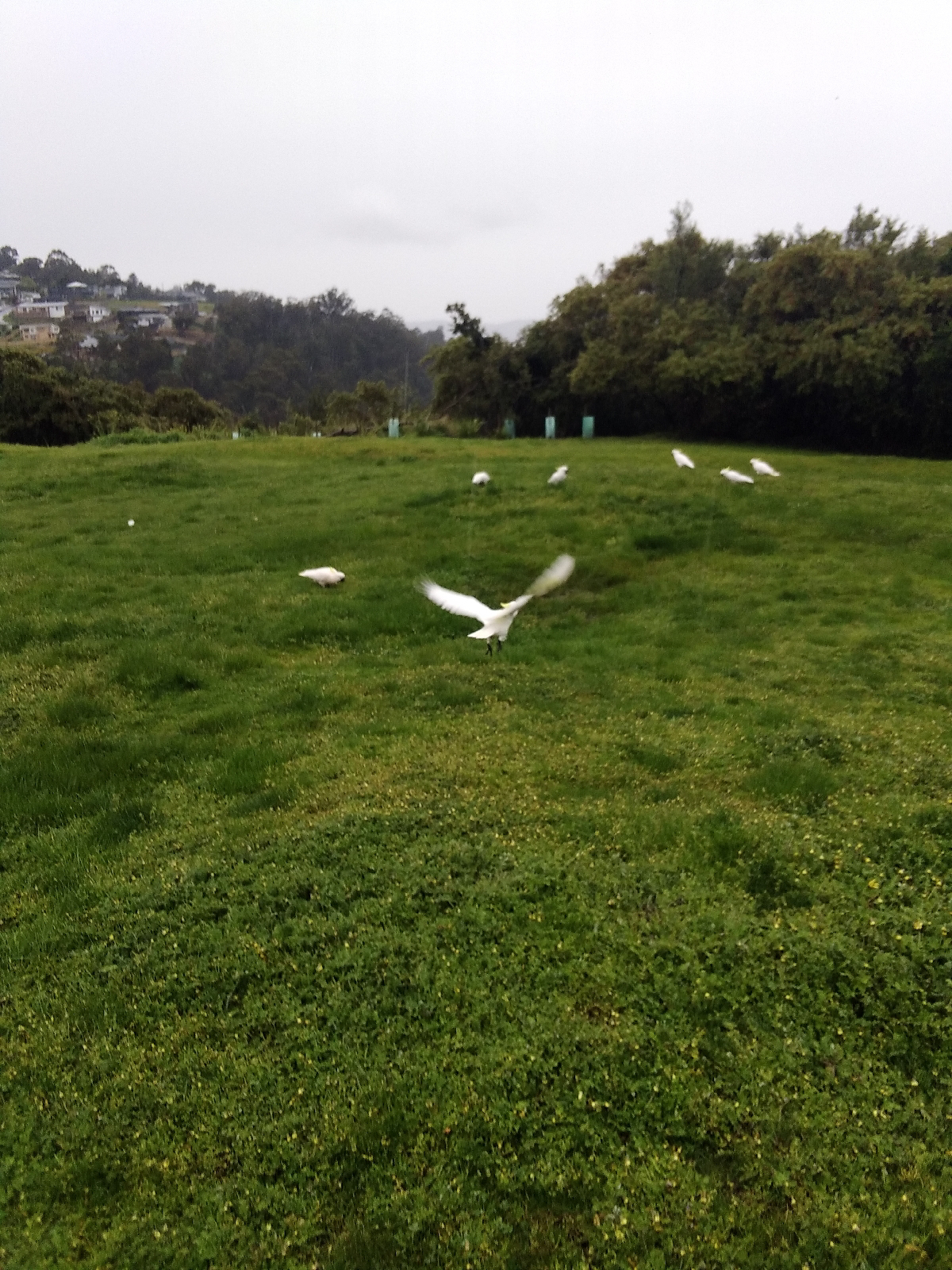 The local cockatoo mob grazing by the playground.
All of this is a reclaimed municipal tip. The top level is a pretty good soccer ground now although there are still drainage problems on the lower side. The playground level is undulating and uneven, designed for you to turn an ankle while trying to fly a kite.
Posted by Chris Rees at 9:28 AM No comments:

Our youngest son breaks his wrist

Michael was on his way to his friend’s place on his electric scooter a few weeks ago on a Sunday night. It was after dark, he was going down a slight slope on a rough bit of footpath near St John’s Hospital, and some people stepped out onto the footpath. He braked too hard, came off and put his arms out, and suffered the classic ‘break your fall’ broken left wrist.

We went to Emergency, but I didn’t appreciate how bad it was until the radiologist muttered “it’s a bad break” after the X-ray. I feel bad that I had actually made Michael wait until I’d finished my dinner before I took him to Emergency. His bones didn't come through the skin but they were some way from where they should have been. [I asked yesterday at his 2 week review which bones were broken, radius or ulna or both - and they didn't really answer because to them it essentially doesn't matter. They are parallel, and one splints the other, or something].

They tried to get the bones back in place. They put a tight cuff around Michael’s upper arm and inflated it; this is called a Bier block. Then they put anaesthesia into his lower arm through a cannula. Once he was numb, one doctor held his upper arm while the other hauled on his hand to try to reposition things. This was unsuccessful so they booked him in for day surgery three days later.

A funny thing; we arrived at Emergency around midnight Sunday. They gave each of us blue stickers as we came in which I was pretty sure said NOW (they actually said to us "stick it on your phone"). I was pleased that we’d been assessed as some sort of priority. Days later I looked at the sticker and realised it said MON. Far from promising expediency, this was advertising that things were slow they had to tag people by the day they arrived, not the hour.

His surgery went well, but it took such a long time. The procedure is called an ORIF - open reduction internal fixation. He now has a metal plate in his arm. We were asked to be at the hospital at 12; there was an admissions process but he was gowned up and ready to go by 1. It was after 4 when I said goodbye on the threshold of the theatre and they wheeled him in. We collected him around 7, and he said he felt fine. Even though we arrived at 12 he was the last day patient there and they were pretty much sweeping up around us.

We had to pick up some pain relief meds on the way home. On the way, the hospital rang sounding slightly panicky asking if he still had a cannula in his arm. He did not; they had not recorded taking it out. At the pharmacy, the pharmacist was not happy with our prescription. It had two different drugs on it; it has to be one drug per prescription. Amazing that a hospital registrar wouldn’t know that. Fortunately she gave us what we needed after chewing out the hospital over the phone; and them agreeing to fax her two new prescriptions. Even more fortunately Michael didn’t need much at all in the way of pain relief.

So he started mending, and living with his plaster cast. Four days later we were back in Emergency to have it replaced, after he dunked it in the bath. Emergency made an appointment for us at Plaster Clinic which is excitingly on the 12th floor, with very interesting views. But we were whisked in and out so fast that we hardly had time to take them in.

Yesterday was his 2-week post-surgery revisit to Plaster Clinic. They took everything off, re-dressed it and now he has a light velcro/nylon splint arrangement that he can remove to shower. I finally got the answers to some vital information I had been chasing since surgery, which I will record here for posterity. 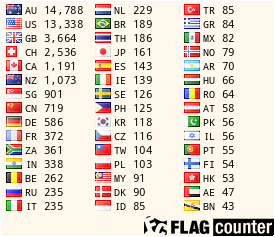