I dropped Marcus at indoor soccer before 7 last night (Sunday) and went for a walk, with a vague plan to wander through the nearby school oval and follow my nose. It ended up being the most interesting short stroll through an abandoned-seeming but fully-maintained government education/health/social welfare precinct. While that sounds dull, it is anything but. It's made up of buildings from just about every decade back to the 1830s. I am yet to research all this but there's information here.

I say it seemed abandoned but everything is maintained, lawns mowed etc. And there were cars parked all over the place, so there were people at work in the buildings although it was Sunday evening. There are actually three aged care facilities in the area, so that explains it I suppose – I heard music from one of them called Rosary Gardens. The zone had a Chernobyl feel; so quiet but no vandalism, no hoons driving through although it is wide open with two entrances from main roads. I didn't trespass or hop any fences (this time) to get these photos.

Anyway – I clearly know very little so I am going to just dump the photos here and caption them as I find out more.

I have just been doing some reading about East African history, particularly Ethiopia and Eritrea.

In our generation (I'm 51) Ethiopia is still mostly associated with the famine there in the 80s, which was the subject of the first mass-fund-raising celebrity concert, Live Aid. So we think of starving children and Bono.

Older generations might associate Ethiopia with Rastafarians. Haile Selassie (Emperor of Ethiopia 1930–1974) was considered a god by the Rastas. Before he was crowned, Selassie was known as Ras (Duke) Tafari.

A generation or two further back, people might remember the Italian invasion of the 1930s (Ethiopia was called Abyssinia then), when Mussolini wanted to distract people at home from domestic problems by providing them with an exciting overseas empire.

When I was a nerdy kid I would enjoy looking at old atlases with redundant countries. I didn't know about wars of independence or colonial exploitation etc, I just thought it was cool that Bechuanaland was now called Botswana and Tanzania was a merger of the former colonies Tanganyika and Zanzibar. The top of Africa on the old maps was all purple (French) while down the east coast was mostly pink (British) but going back before WW1 you could find maps where half of it was German (green). The two parts of Africa that were uncoloured with a colonial tint in old maps were Liberia and Ethiopia. 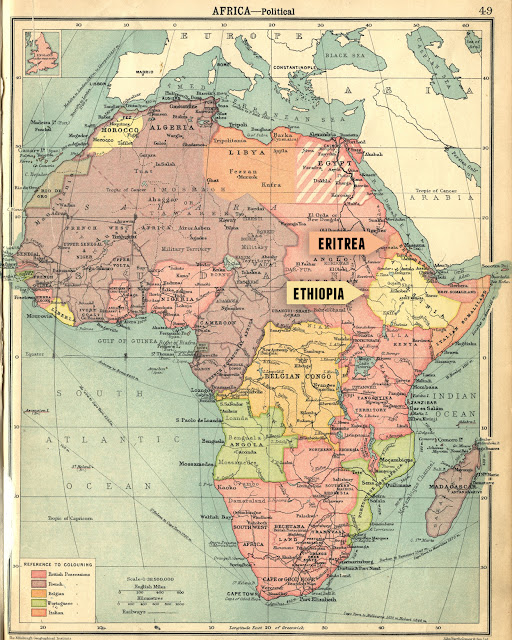 Liberia is an interesting story all its own - founded by 15,000 African-American freed slaves and slave descendants; independent since 1847.

But I had never asked myself, how did Ethiopia stay independent during that European colonial rush? The short answer is they had an extremely shrewd leader, and benefited from the rivalry of the British and French. Also Ethiopia had been a Christian state since the 4th century so it was quite exceptional that way. And finally they were fortunate that the European power that chose to invade in the 1890s was the weakest; Italy.

The British by then really ran Egypt. They built the Suez Canal in the 1860s, and now the Red Sea was suddenly very important. The Egyptians under Khedive Ismail the Magnificent had run Eritrea, the coastal region on the Red Sea north of landlocked Ethiopia. Ismail was in massive debt and to save money withdrew from Eritrea. The British removed him as Khedive and fully took over, but they also didn't want to pay for Eritrea; so they suggested the Italians invade.

France at this point ruled North Africa from west to east save for the north-east corner made up of Egypt, Sudan and Ethiopia. Britain needed to stop the French extending their hold to the Red Sea. Italy-France relations were at an all-time low so getting the Italians to step in seemed like a cheap and effective way for Britain to thwart France.

Ethiopia was ruled then by Emperor Yohannes IV. He was completely shafted by the British. One of his sub-kings was Menelik of Shewa. After Italy moved in to Eritrea, Menelik negotiated peace. The emperor died in battle with neighbouring Sudan, and Menelik succeeded as the next emperor, and started uniting/conquering the regions south of Shewa. He wisely incorporated leaders of the subjugated peoples into his government. His armed forces ran on feudal lines; so all the sub-kings that owed him tribute furnished troops. He was content for the Italians to have Eritrea; it had not been part of Ethiopia before anyway, and it kept them happy.


Turns out the peace treaty Menelik had concluded with the Italians had a clause in the Italian version that wasn't in the Amharic language version, which mentioned that Ethiopia was now subject to Italian foreign policy. Menelik heard about this when the Italians started skiting about their massive new empire; and responded by repudiating the treaty. He was a big fan of modern technology, particularly arms. The French were happy to load him up with guns, and extra help came from the Russians. Russia took an interest in Ethiopia due to their shared Orthodox Christian faith, and expressed this by giving them artillery weapons.

When Menelik tore up the treaty, the Italians tried to win him back with an offer of two million rounds of ammunition. He refused, so Italy invaded. On 1 March 1896 the two armies met at the Battle of Adwa.


They [the Italians] had inadequate maps, old-model guns, poor communication equipment and inferior footgear for the rocky ground. (The newer Carcano Model 91 rifles were not issued because [General] Baratieri, under constraints to be economical, wanted to use up the old cartridges.) Morale was low as the veterans were homesick and the newcomers were too inexperienced to have any esprit de corps. There was a shortage of mules and saddles… [Prouty, Chris (1986). Empress Taytu and Menilek II. ]

The short story is the Italians were defeated. Menelik could have moved in to take over Eritrea at this point but wisely demanded only that the correct terms of the treaty be reinstated, with the Italians still in charge there and independence guaranteed for Ethiopia. Italian prisoners of war were treated with courtesy and respect, but kept captive until a new treaty was signed.

Initially the Italian peace emissary demanded while Ethiopia would not be an Italian protectorate it was forbidden for any other power to become a 'protector' either. Menelik was outraged at this plan to tie his hands, and said he would hold the emissary hostage until Italy stopped messing about. Eventually the Italians agreed to full independence and a payment of 10 million lira for feeding their captured troops, while Ethiopia returned the prisoners unharmed and, incredibly, let Italy keep not just Eritrea but also the northern province of Tigray that they had overrun early in the war.

Italian Eritrea developed along similar lines to other European colonies until 1941, when the British defeated Italy at the Battle of Keren and expelled them. 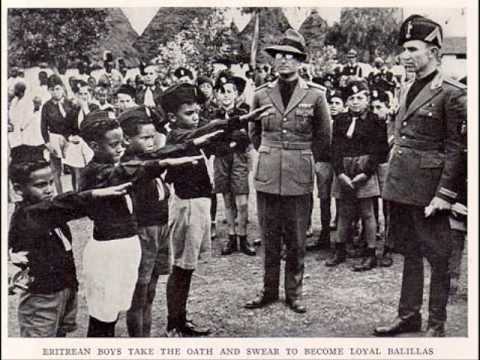 The Italians left some beautiful buildings behind in their colonies in Africa;
but my personal rule is if you are going to look at pictures of their architecture
you have to also look at them making African kids perform fascist salutes. 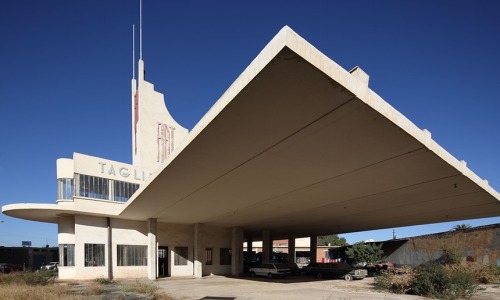 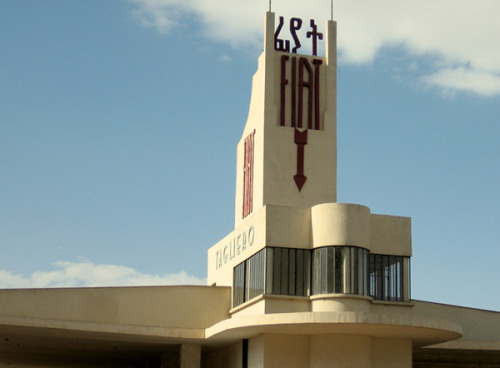 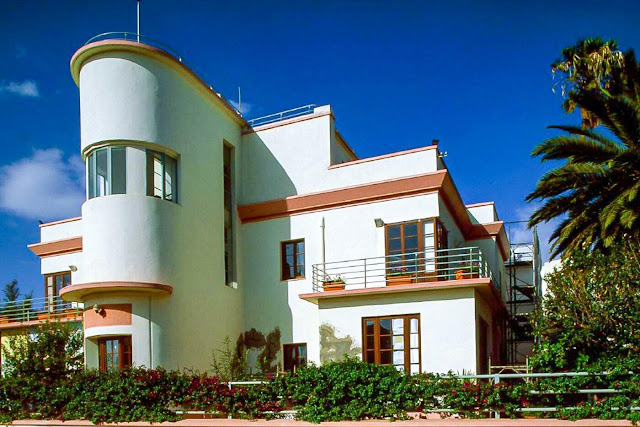 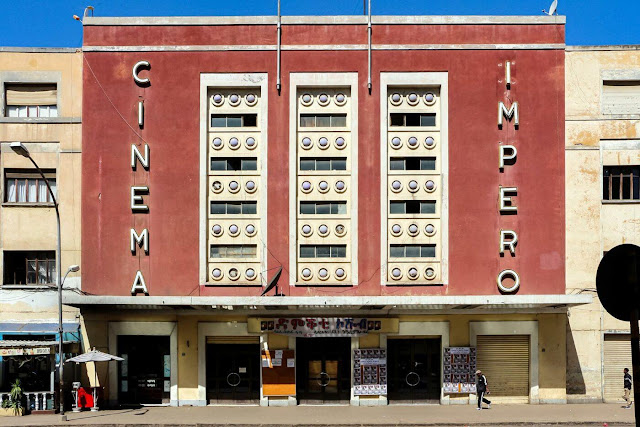 Eritrea remained under British administration until 1950 - they were planning to split it in two and give part to Egypt and part to Ethiopia.

However Emperor Haile Selassie, unlike his predecessor Menelik II, wanted Eritrea. The new United Nations got involved and largely through American urging, Selassie got what he wanted, at first as a federation. Then in 1962 he annexed Eritrea. A thirty-year war of independence followed. In a familiar African pattern; the freedom-fighters won, independence was declared in 1993, the freedom fighters became the government and declared a one-party state. No elections have ever taken place in independent Eritrea.

Despite Menelik II's reasonable peace treaty, the shame of defeat weighed heavily back home in Italy. Talk of vengeance was a popular rallying point for decades before Mussolini's Fascists decided to again attack Ethiopia in 1934.

The national language of Ethiopia (actually one among many spoken) is Amharic, and it is written with the ancient Ge'ez script. In closing, here are some examples I have collected from the internet. 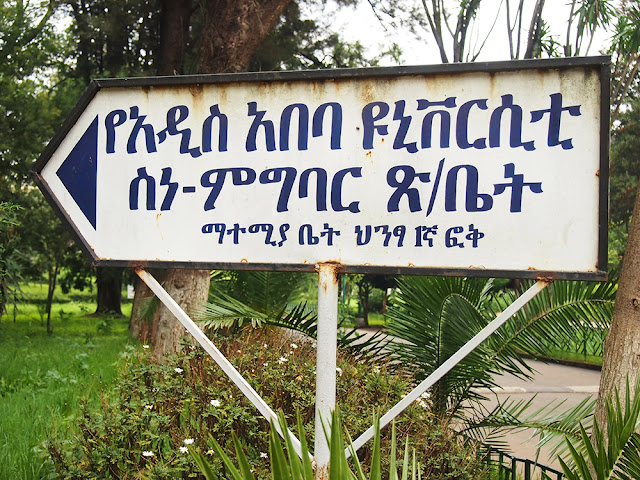 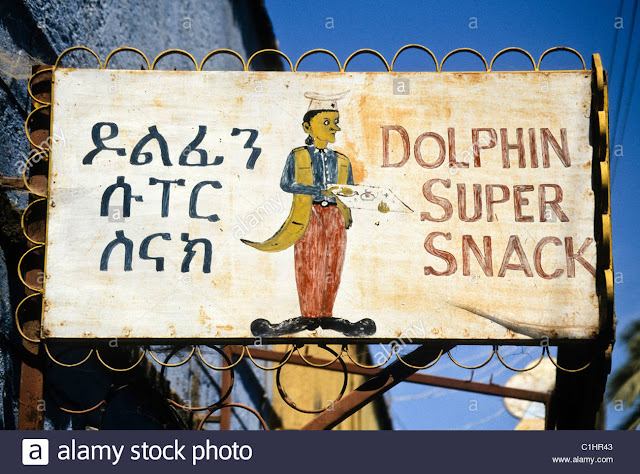 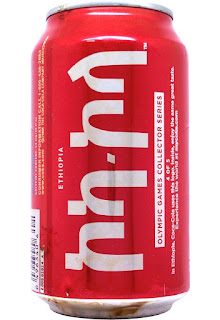 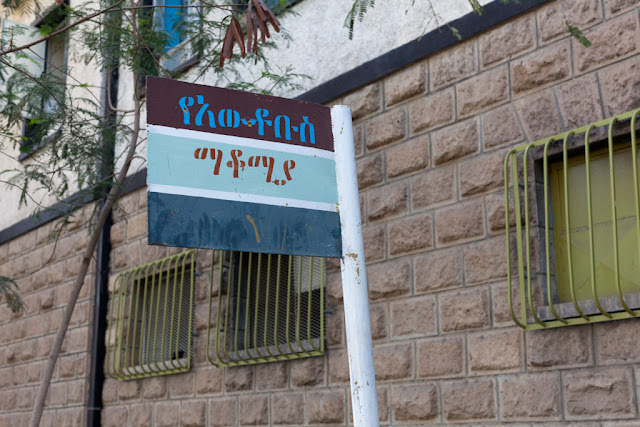 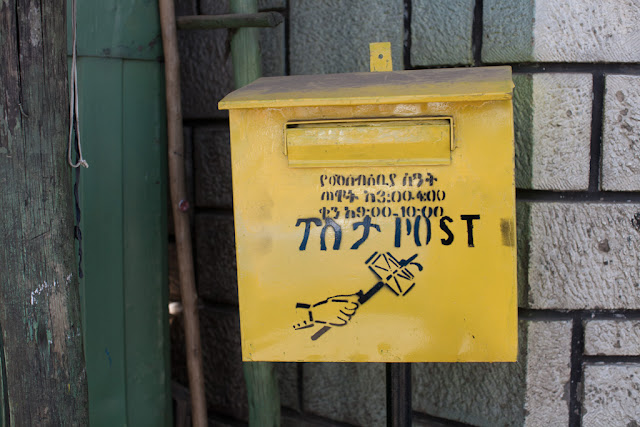 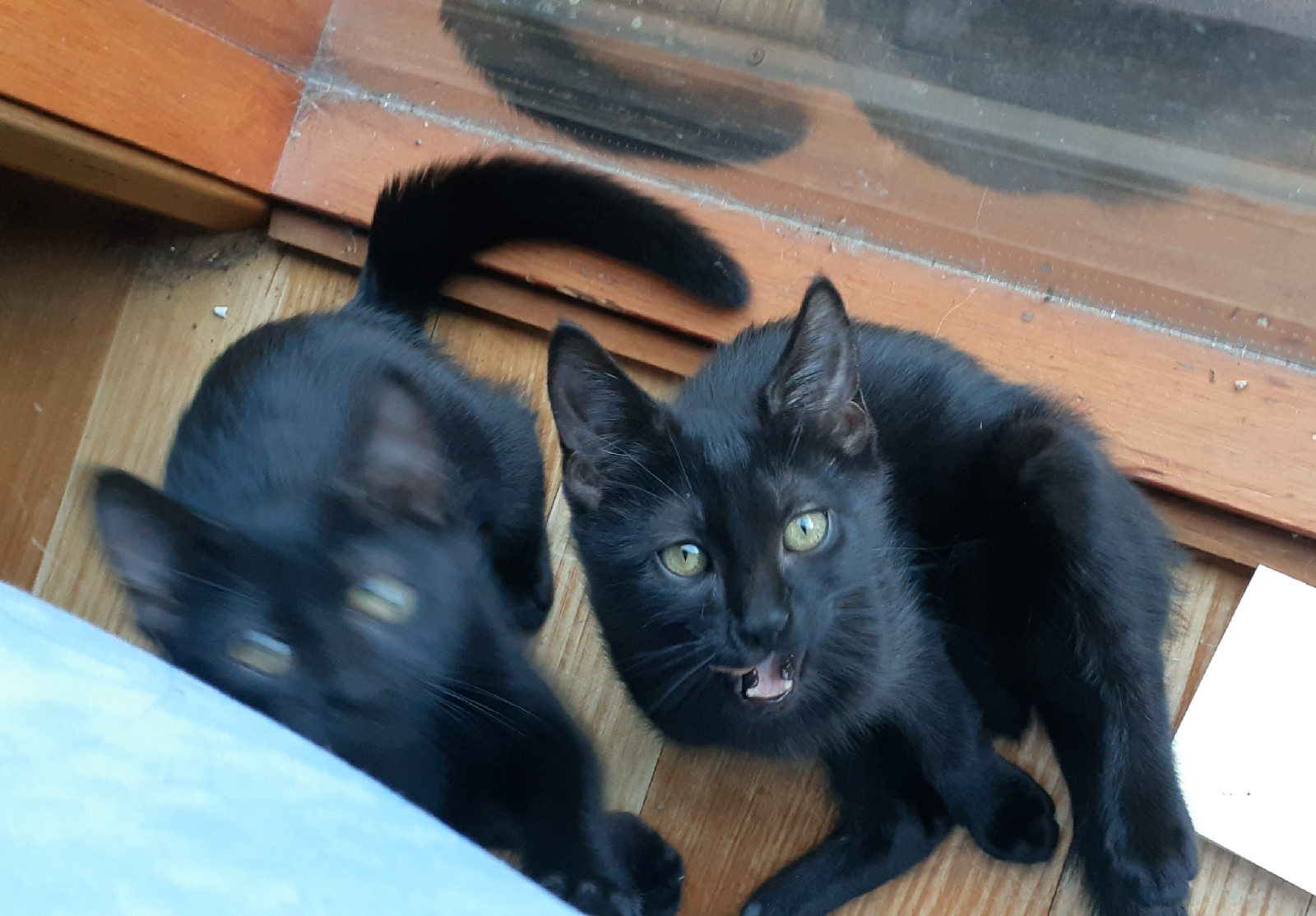 This is Ruby and Coco. They live here now.  Winston is coping very well and we have high hopes for their friendship. 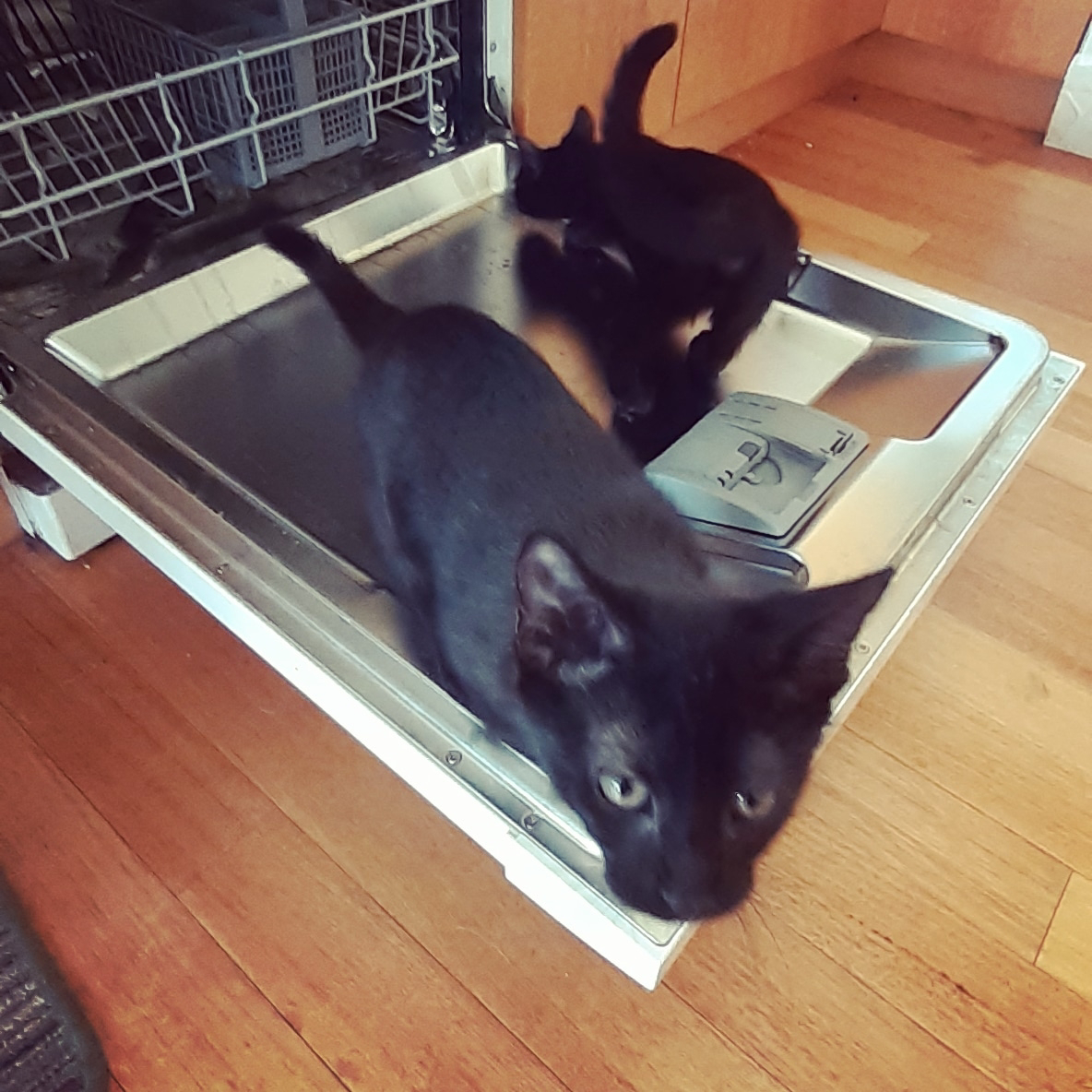 Posted by Chris Rees at 8:01 PM No comments:

This little animation is meant to be the first of a series of memorable Grand Final moments.

Marlion Pickett is a 27 year-old Western Australian who was picked up by Richmond in the mid-season draft. He starred in the VFL grand final a week before the AFL grand final (the VFL is virtually the AFL reserves now). He was named for his first AFL game in the grand final, something that hadn't happened for 60 years.

This is a moment in the 2nd quarter. Richmond are in front of Greater Western Sydney, but the game is still in the balance. Young giant Ivan Soldo hands the ball to Pickett and he gracefully steps onto the wrong foot and executes a perfect blind turn, completely destroying Lachie Whitfield who grasps at thin air.

Watching it live I was struck by how un-flashy it was. Not a last-quarter party piece, not a young star revelling in his stardom – it was just the right move for that situation which opened up the space. Pickett did it slowly and almost apologetically. Sorry Lachie, this is not designed to make you look silly, I just need to make some space so I can deliver the ball accurately to my forwards.

And he did. A pinpoint pass off the outside of his right boot to a lead from Georgie Castagna who marked and goaled, putting Richmond out to a 28-9 lead. The Tigers went on to crush GWS by 89 points. Pickett was outstanding and was voted 3rd best afield, in a grand final, in his first game. I hope to be there at the MCG for his second, on 19th March.

Still to add: Georgie's mark and the soundtrack
Posted by Chris Rees at 3:06 PM No comments:

Rosalsie Gascoigne is still dead, sadly. But I just came across some more of her work and I would like to beautify the blog with it. 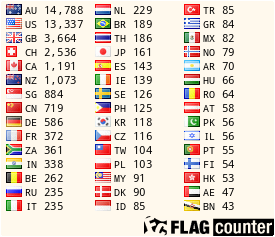